Recently I was beginning to think about all the advertising and marketing I wanted to do once I open my shop but I also realized that I should consult with the experts. I'm not so sure how much or where at I should generate $$ to make this feasible in my business plan. Futhermore, I will have bi-weekly, monthly and quarterly events that will definitely get the word out but I'd love to hear more from the experts.

For more information regarding this event and other… Continue

The beginning of last Augest, some co-workers and I decided to take a trip up to Vancouver to tour the Coffee industry, hang out, and do Canada things. Its rough that things don't always work out how you want...

We left Seattle around 7:00 PM Friday night. Five of us packed into a two door Subaru. The sense of togetherness was great...a little too much. We arrived at the boarder around 9:15ish. We love national security and things of that nature. After searching… Continue

I have stuff to sell

I have come into owner ship of several cases of Dr. Smoothe brand smoothe mix, i have the following flavors

So the baristas here at Hardbacks are a bunch of goofs. We have so much fun with one another its ridiculous.

We play the letter game (A to Z of whatever; animals, cities just random crap like that)

The best thing so far was when i was challenged to our favorite game. Plainly called "Categories". Simple.

How do you forget the coffee!!!!

Okay, so we just opened the new Hardback Cafe not even a week ago and so far it's going smoothly. We've had a fairly steady flow of customers and our beginning and "intermediate" baristas (including myself) are doing pretty damn good.

During our training a while ago (i assume this is the same with any coffee shop) we've gotten pretty close to one another already....except for like one person.

There is one barista that is just bugging the shit out of everyone ALREADY!… Continue

I have been playing with my cotton filter and hand grinder for , approximately, 1.5 years. At first, things went well, lovely aftertaste, aroma and etc. Then suddenly one day all the good things disappeared. Yeah in one single day!
I thought it was the beans so I talked to my roaster whether the sudden change is related to the beans or not. For sure the beans were fine because some casual cuppings were done and the cups were absolutely tasty.
We then came to a conclusion that it could… Continue 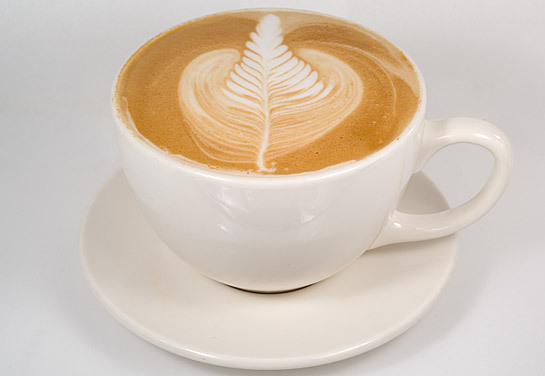 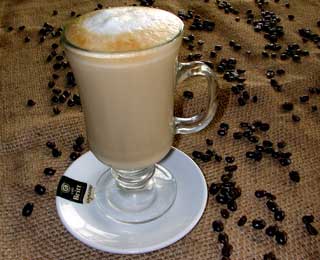 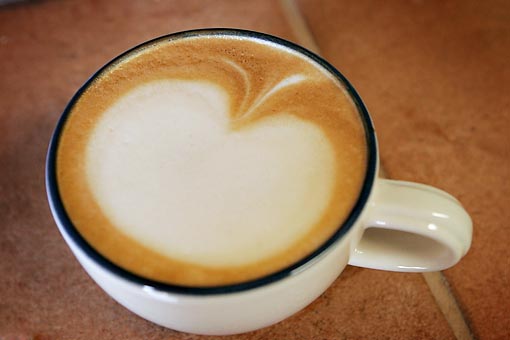 Add espresso and Monin Caramel Apple to cup and stir well.
Fill with steamed milk.
Top with whipped cream and a drizzle of Monin Caramel Sauce

New Single Origin Coffee available! Ethiopian Sidamo, a washed coffee with some really nice if not slightly out of the norm character.

Most striking is it's similarity to a late harvest dessert white wine. Refreshing and sweet green grape flavors in a nicely powdered sugar in honey texture. Slightly percieved grape peel as well. The finish reminds me of a nice dry chablis. Roasted to keep the sweetness prominant and the acid light and in balance with the sugary texture. Unusually low… Continue

finca vista hermosa
i think only the second time i've had it, actually, but that is a mistake to be corrected. lots of milk chocolate, totally reminiscent of my hometown huehue.

production yirg
classic earl grey, with a discernible and nice tartness on the finish Since 2004, Ramacafé has gathered scholars, producers, roasters, specialists, cooperatives and organizations involved in the coffee industry and coffee culture to share and discuss the future of the industry. This year, José Luis Zárate, Coffee Kids’ international program director,… Continue

What a great way start a Monday. When I arrived last Monday, I had a message of good news and glad tidings from Sarah Allen at Barista Magazine. This past weekend (Sept. 12-14) Hiroshi Sawada, owner of Caffe Milk Art in Japan, competed in the Millrock Latte Art Championship and took first prize in one of the most… Continue

How 2 Make Money In The Coffee Industry

I figured, I would write my thoughts on making money in the coffee industry. I have worked for several coffee shops, I have also worked my own coffee concession. I roast beans by pan, yes it's work, but it's also fulfilling, however the question is am I making money? Well honestly I would have to say no, why because although I work for myself I'm glued to the bean, and with that I can't go out and enjoy the coffee scene the way I would like to. Now knowing what I want to do, it's a matter of… Continue

I recently had my hopes for joining in a barista competition dashed. In talking things over with the owner of the shop I work at, I've come to realize that I will have to either do some major fund-raising/sponsor-begging, or sit out yet another year. And due to the energy that the former will require, I'm leaning towards sitting out.

I'm not happy about giving that up, but with my life going in so many directions at once, I am content to keep my coffee world as calm as possible for… Continue

Night Music; the sounds of coffee and West Java.

Jakarta is a city of noise, a cacophony of noise. From the moment you arrive in the city, whether it is by airplane, train or bus, the new arrival steps into a warm, humid bath of sound. The noise is mostly man made, motorbikes, trucks, cars, horns, sirens, bells. It is a place not for those who like peace and quiet.

Rural Indonesia is quite the opposite- a mixture of man made and nature’s sounds gently rolled into a smooth,… Continue

This has been a tough time for everyone, Gas lines, Grocery Lines, no coffee, what no coffee, well here at Hopson Coffee we were prepared and roasted 100 pounds on Sunday after the storm. I have several generators, (I sell them with electrical services with my other full time business), so we fired up the roaster and made brown beans. I was really well prepared for this as my family had a 100lbs of beans and rice, along with a stocked walk in pantry, plenty of water, even a well we can drink… Continue

The tastes and preferences of coffee consumers in the United States affect the livelihoods of coffee producers in places such as Central America, East Africa, and Southeast Asia. In this paper I examine the attempts of a coffee shop owner in Central Illinois to create a “coffee culture” in which his clientele learn to appreciate the different qualities… Continue