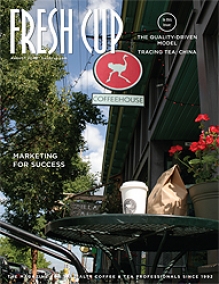 Nine Bars
Power up your profits with… Continue

New coffee in from Guatemala

No specific story on this offering from Antigua, just a satifying example of an age old classic.

Acid- 7
Body- 8
Texture- Juicy round body with hints of powdery grit, softens in texture as it cools.
Flavor- when ground this coffee smells exceptionally clean, orange and grapefruit acidity, milk chocolate and the expected sweet caramel. No sign of any vegetal notes. Get it wet and it stays that way, clean and chocolately… Continue

What would this coffee retail store be worth?

I am looking at a second location and there is a store available for sale. What would you pay?

10 years under same ownership. Beautiful interior. All equipment is in excellent condition. 60% is coffee beverages, the rest bakery, grilled panini sans. Reported sales in 2007- $170K. 2008- $206K and looks like this year will be about $190K. 5 years left on lease at $725/month with option to renew lease.

I'm taking a poll and would love to know what you think.
http://bit.ly/jGw4L

This is awesome! Counter Culture Coffee is So Good!!

www.freshcup.com
PORTLAND, Ore.—(July 22, 2009) Fresh Cup Magazine is pleased to announce the hiring of Dan Leif to the position of Associate Editor. He previously worked as a copy editor at New York City-based marketing industry trade publication Advertising Age, where he edited and wrote headlines for dozens of stories each week in a fast-paced newsroom.

Okay - so like many of you, I'm on Facebook, and I saw the Starbucks Free Pastry Day event happening for today.

I think this is great marketing, and Starbucks hit a home run (with me at least) when they did the Vote Promo last November (anything to get people to vote is a-okay with me!). But, today - I was going to go into the Starbucks in my neighborhood (S. Beverly Drive - Beverly Hills, CA) but then I started to think about what I really wanted.

Did I really want a free… Continue

What do you think of Starbucks' new store idea?

I'm taking a poll on the Starbucks that isn't a Starbucks. http://bit.ly/OJUNS

DaVinci Gourmet, the industry leader in gourmet syrups, is that rare company that extends support of the specialty coffee industry through the entire chain of supply – from coffee growers to beverages served worldwide. Whether it is sponsoring a myriad of barista competitions or providing menu and technical support to small cafes, many witness first hand DaVinci’s support. In particular is their exceptional support of Coffee… Continue

We failed this morning...

We were the pig in the slaughterhouse, the fish who swallowed the hook, the emperor with no clothes…..and we had to utter the five words that plague all barista’s dreams: We are out of coffee.

You see, Starbucks’ corporate offices recently decided to implement a new brewing strategy that would virtually eliminate all possibility of running out of regular, bold, or decaffeinated coffee. Essentially, the innovation is a bright idea based on a rotation of urns with a new type of coffee… Continue

Hey all. I am opening a coffee shop in NY in a couple of months and am trying to keep my initial costs as low as possible. I was wondering what other people's thoughts were on getting used equipment and where I could find the best deals out there....
thoughts??? My beloved caffeine enamored friends, it is time to introduce the chottie, the delectable drink pictured above (which, coincidentally, was quickly consumed by me this morning). The idea of the chottie was born on one of our monthly customer satisfaction reports when we read the comments left by an apparently satisfied customer.

The transcript is recorded as follows:

Question: “What was your favorite thing about this visit… Continue

We're into our fourth auction for Coffee Kids and we were able to import one more machine, so we've got a total of three more up for auction over the next few weeks. The machines came into the store last week, so check out a video of the features:
If you're interested in purchasing a unique and excellently performing collector's item while also contributing to a great cause, please help us raise some cash! You can find more details and a link to… Continue

There's a Sleeper Cell in My Latte...

Matcha, essentially, is powdered green tea. Matcha is very useful for mixing with milk or cream base to make “delicious” lattes and frappuccinos. However, what happens when BaristaJim is subjected to this fluffy, green substance? He gets sick. Very sick. I’m not talking about a little sniff here, a little sniff there. I’m referring to sore, debilitating, closing throats.

Thus, what happens when somebody orders a Strawberry Banana Matcha Vivanno? I find myself handing out a… Continue

I’m usually perplexed as what to write when I start a new website, blog, homepage, or the like. Thus, instead of permitting my thoughts to meander around, I will hone them in and focus them on all things coffee.

You see, working at Starbucks presents the simultaneous blessing and curse of working with the public. It offers a venue for great conversations, connections, and networking. However, it also makes this barista vulnerable to many conjectures about something he’s devoted a… Continue