Wanted one for a LONG time, years. Was thinking the 124oz 44.5" tall monsters but more practical to get multiple of the smaller. So finally pulling the trigger on 4 32oz Yama Cold Brew towers. This way instead of just being able to afford 2 biggys now can have one each at two locations, 2 at third location/backup waiting for inevitable broken glass replacements. Can augment cold brew with current method if needed and still have the wow factor.…

When roasting dry processed Ethiopias be careful using the tryer during 1st crack, don't inhale too deeply or you'll be snorting hot chaff! :)

Once it might have meant catch the Third Wave in Specialty Coffee, single origins, brew to order etc. Today for us it's catching a temporary down swing in the C-Market upward spiraling price wave. Last week got lucky on our order for over a Ton of greens catching the lowest price point in a couple weeks. Next day back up 15 cents a pound, today one week later up a whopping 46 cents a pound hitting a new highest price in over two decades. At today's high price would have been double what it…

Our little company hit a milestone today. For the first time over one Ton of greens delivered in one day, 2375.09lb. Up from previous high of 1845.1lb delivered less than six weeks ago. (ok, not much less, 5 weeks 4 days:) I been a roastin' fool on my little USRC 3k!

Well, found one on Craigslist some time back, got it for a song, $75. 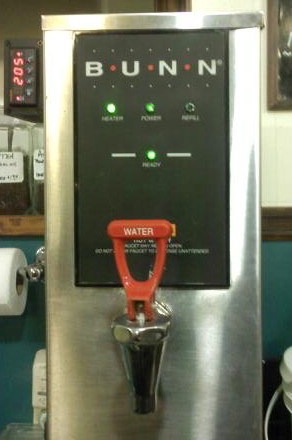 One hundred fifteen fahrenheit no more! All…

Held off as long as I could but yesterday had to bite the bullet and place a greens order. Those 1382LB greens cost $400.78 more than they would have last order 1 month 12 days ago! Even worse, it'll be more like $489 more after roasting weight loss, or up over 35cents per pound in 6 weeks. But whachagonnado?

Holy "ahead of schedule" Batman!

Ok, so my 10 year plan was to open a Roastery and 5 or 6 coffeehouses each a couple years apart. Now 2 years 6 months 21 days into the plan. Opened coffeehouse number 2 at my new Roastery location NY Day 4 months 21 days ago right on schedule.

Just got the seller signed purchase contract back for number 3 today, scheduled to close next Friday May 28th. Wasn't looking for it, just fell in my lap May 4th. Which I atribute to constant quality focused hard work and the Man…

Making your own Masala Chai, is it worth it?

Just mixed up another 5LB of my chai blend. Quality tea and spices are expensive! Or so it seems when buying all the ingredients. Is it worth it? Besides customers raving is it really worth it bottom line!

Got another monkey off our back at my new Roastery Coffeehouse location, cracked the first Double C-note day today exactly 4 weeks after opening. Took almost three weeks to make the first C day, now to build to Trip C and beyond. (Doesn't count wholesale beans)

Christmas coffees, me and my yum...

We so savor them, pa yum pum yum pum,
When we come.

"No Brainer" first shot and other meanderings

Yesterday evening after about an hour dialing in the PID's for the brew boilers pulled the first shots on our Roastery Cafe's new Linea 4AV (new as in newly rebuilt from the chasis up with dual brew PID). No brainer cuz have up to manual functionality only, Friday electronic controls and brain go back in. Somewhat surprisingly first shot was quite decent. Somewhat surprising since no dial in the grind shot on the Major, simply adjust the grinds by feel between the fingers before grinding… Continue

Jumped one of the last hurdles...

Bruce, my health inspector (both for my existing downtown Paradise Cafe and now soon to open Roastery Coffeehouse) stopped by this afternoon to look the place over. He said all looks good and approved the pre-open plan. Now just a few (hundred, or is it thousand:-) remaining things to do before the actual final pre-open inspection sometime before NY Day Grand Opening Party... Drive fast (and safe) Bry! :-)

I just read a story that illustrates quite well the battle some of us face by choosing to serve only the highest quality products like not using airpots.

Washington, DC Metro Station on a cold January morning in 2007. The man with a violin played six Bach pieces for about 45 minutes. During that time approx. 2 thousand people went through the station, most of them on their way to work. After 3 minutes a middle aged man noticed there was a musician playing. He slowed his pace and… Continue

Last Mazzer Super Jolly I picked up for $100, no lids, no hopper and broken 'timer' switch - had to hold it on. Still a right good deal. Just scored an old SJ that purrs beautifully, has the old off/on/start switch I want (to re-wire on/off for plugging into Gralab timer), broken hopper (who cares), doser in good shape for a cool $60. They were asking $50, but I talked them up to $60 to have it delivered and save me time:-)

Opposite poles or are they?

Saturday I posted about meeting with my Angel Sunday. Sunday morning I arrived to open my cafe and find the front door glass smashed and door unlocked. Got burglarized, but fortunately the place wasn't trashed. Register emptied excelpt for pennies, dimes and nickles and back up change cash box gone. No signs of anything else missing. Called the police and started pre-open stuff after cleaning up the broken glass. Then it hit me, no way to make change! Had a few ones & fives in the deposit… Continue

Meeting with my Angel tomorrow. Been skimping, scrimping, begging, borrowing and credit card "loan" advancing for months attempting to get my 2nd CoffeeHouse open at my Roastery. Few weeks ago during lunch Debi was chatting with Beth, a long time co-worker, and in passing mentioned the challenges I was having. Out of the blue Beth said she could probably loan us the money. Paperworks all done, we're signing tomorrow. The final sprint to opening begins in earnest! (Hence my Event… Continue

It hit me today, this is getting real!

I'd re-stocked the whole bean shelf of my little cafe Saturday morning and brought in 18 bags again today, 4 days later. Then it sort of hit me, it's really starting to get real. It's taken almost two years to build up to going through 25 to 30 bags or so a week (combined off the shelf retail sales and by the cup brew station) plus 3 to 5 five pounders of espresso blend. Not huge by any means, but not to bad for a little 20 seater cafe. And picked up another wholesale account last week. And… Continue

Ridiculously consistent in a good way. Started this afternoon's roast session with three batches of my D'Spro Espresso blend, this one's a pre-roast blend. My USRC automated profile target 17min. (Automatically ends and dumps by bean mass temp, unless I override and go manual of course.) First batch 17:05, second batch 17:05, third batch way off 17:08:-) Going on 2 years with this little puppy and still love and impressed by it...

Roasting Then versus Now...

Just finishing bagging up an 11 batch 85LB greens (includes one half batch load Kona) session that took ~4hrs from powerup pre-heat to cool-down shutoff. Thinking back a couple years when I was starting this insane professional journey waiting for this little USRC 3k to be built and was driving Two max overloaded voltage boosted CCR HotTops simultaneously with batches @~333gr to yield two pounds from 5 roasts at approximately 4 batches total per hr both running non-stop it would have taken… Continue

#12 dancing in the drum, now to change hats and grab the jigsaw...

Batch twelve is dancing in the fire as I type. Good day roasting a quick 96LBs. Ok relatively quick, but 4 hours not bad for this little USRC 3k.

I'd hoped to have the coffeehouse open at my Roastery location next Saturday but alas ain't gonna make it. Still too much to do including too many government hoops not quite jumped through yet.

Now to change hats to finish carpenter or is it plumber, cutting a hole in the backbar counter for one of the sinks. Tomorrow will… Continue