While I was walking to our booth the first morning of the show I spotted the Bite Club booth. Wow, I thought, I jumped on this focused social network train at the right time! They had some really cool buttons and promo materials which I grabbed and then later in the day went back to introduce myself. Their booth was packed, and they had multiple people live blogging during the show, I remember doing an interview, but not sure if it ever surfaced. Sonny is the bite club CEO and it was hilarious, because we were dressed identical with a modern long sleeve shirt and dark sweater vest, the usual uniform for a dot com entrepreneur these days. We talked about Bite Club for a while before I told him about Barista Exchange and it was interesting to hear basically the same mission statement and thought process, but in regards to two different industries. I was intrigued by his site and checked it out that evening. It has some really cool features to it, like a Digg.com version of rating things called Bite it! It is also divided up into many groups and search oriented sections.

Long story short Sonny joined the site a while back, as he is a true Coffee Enthusiast, and just today wrote a really great blog about Barista Exchange, and I wanted to reciprocate.

So, make sure to go check out BiteClub.com - I look forward to working closer with Sonny and BiteClub to share in this crazy online social networking revolution. 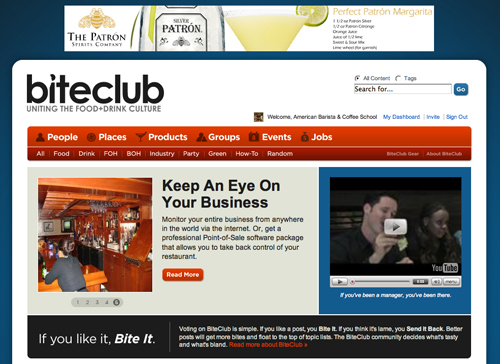 Comment by Sonny Mayugba on April 1, 2008 at 4:15pm
Ahhhhhh shiiiiiiit! You got me on that one, and here I was, I thought you'd be all Mr. Indie Coffee, I should have known you were a pop culture fanatic, like me. Good one. You got me. So who is this?

Comment by Sonny Mayugba on April 1, 2008 at 3:35pm
OK, just for the record BaristaExchangers, this was no love-for-love exchange, I blogged up BE because it's killer. Matt recip'd, which is cool. OK, with that said, thanks Matt, looking forward to all the criss-cross (not the old rap band) we can do.