That coffee comes from WHERE?

ShareThis
Café Luwak does it in downtown Ypsilanti Michigan and it does it well. They offer a small, but tasty selection of coffees to drink, but are the only café in the area that brews straight up Kopi Luwak coffee.

Kopi is the Indonesian word for coffee and Luwak is the local name of the Asian Palm Civet from Sumatra. It is the most expensive coffee in the world; $200 a pound. Why you ask? Well it comes from the digestive system of the Civet. And I really don’t want to go any… Continue

Hey everyone! This year we will be having the Spring Coffee Fling on Sunday, the 13th of June at Spuyten Duyvil. We will meet in the back garden starting at 6pm until they kick us out. For those of you new to this Fling thing, a few of us organize a bi-annual gathering of the amazing people that surround our beloved brown-bean beverage, Coffee! This industry has some awesome folks working in it! You really don't even have to work in a coffee based profession to Fling. Feel free to join us for a… Continue

Background: Mugsies is nestled in the downtown district of a small community in western Pennsylvania about 60 miles north of Pittsburgh. It caters to a hybrid customer base of college students from the fairly prestigious Westminster College and rustic local farmers. On weekends, the relatively small cafe can often be crammed, as the shop regularly features several local musicians such as Adrienne Nightingale, David Bailey, and Randy Niles. For several years,…
Continue

"Back in the days of the Boston Tea Party, drinking coffee became an act
of patriotism as Americans protested the excessive tax levied by King
George III on their tea. The Continental Congress, as a result, made
coffee the national drink. Coffee houses soon became gathering places
for people such as Paul Revere, John Adams, George Washington and others
known as the Sons of Liberty."

Holy "ahead of schedule" Batman!

Ok, so my 10 year plan was to open a Roastery and 5 or 6 coffeehouses each a couple years apart. Now 2 years 6 months 21 days into the plan. Opened coffeehouse number 2 at my new Roastery location NY Day 4 months 21 days ago right on schedule.

Just got the seller signed purchase contract back for number 3 today, scheduled to close next Friday May 28th. Wasn't looking for it, just fell in my lap May 4th. Which I atribute to constant quality focused hard work and the Man…

Two Colombian Estate Coffee Blend.
Narino and Cauca.
Acid- 7
Body- 9
Texture- root beer, effervescent, bubbly.
Flavor- what diner coffee wishes it could be. The classic Colombian profile or "diner coffee" as some call it is on display in a great way. We took two Colombian S.O. Estate coffees that each cupped nicely but were not the full package that we would like to offer as a single origin and combined them. The…
Continue

Brazil S.O. Fresh crop arrival.
Farmed by Eduardo Macaubus in the Brazilian Highlands, Minas Gerais.
Acid- 6
Body- 7
Texture- cleaner than last years. Like orange juice with a bit of dust from peanut skins.
Flavor- Last years single origin we featured from Marimbondo was all about the hazelnut. This coffee from Eduardo Macaubus follows suit but just not as obviously. The front features a tingle of sweet orange…
Continue

I thought I'd re-post a portion of my blog / facebook notes on cash drawer accountability here.

Every day here at SelbySoft, we receive calls asking about shortages in the cash drawer. While a number of these are simple mistakes by the crew, theft is an issue as well. If we can make our cash handling employees accountable for the mistakes and shortages, then we are on…
Continue

Whip it up with a cup of Devo

When the mocha comes along, you must whip it. Put on your red dome stair-looking hat and admit that you are not men, but Devo. Well Mark Mothersbaugh, former front man of Devo, coffee lover and now entrepreneur of Mutato Muzika is all wrapped in one.

He’s been at the grind of new wave music since the 80’s with the well known group and now his music can be heard in commercials, cartoons and movies. He loves the vibe of music and the one coffee gives him. And how appropriate is that;… Continue

Competitors for the Latte Art Competition at Coffee Fest Minneapolis have been announced. Click on the url-link above "Bracket". Also attached as a jpeg image. 
Step back in time to the 1920’s, a place with a Bohemian vibe and décor with a strong 20 something hangout and smooth espresso and you’re standing in Café 1923 coffeehouse in Hamtramck Michigan. Located on the corner of Dubois and Holbrook street, the experience is like being at grandma’s house; two rooms of comfort and warmth. If inside doesn’t seat you, the backyard has tables and chairs to…

Sample iced drinks, pick up recipes and get ideas for your summer drink menu!

Their Coffee Is Da Bomb

In the heart of downtown Ypsilanti, nestled between the library and an unoccupied building, is the coffee brilliance know as Bombadills. Bombadills has been there for five years now and is run by Peter Rinehart. It is a cozy place to eat, caffeinate, mix, mingle, and meet. It is brewing at 217 West Michigan Ave.

You might be lucky and get a front parking spot, if you’re a fan of parallel parking, or there’s a small lot behind the building. Seating is plenty with tables and…

This is where I'll start

To anybody that may be reading this, my name is Phillip Prass. As of today, May 9 of 2010, I am 20 years old and working at a Boston Stoker's coffee shop in Dayton. I came across Barista Exchange due to a work bulletin and registered almost immediately.

I've recently come to find a niche in the coffee industry, one where I hope to open a shop of my own.Hopefully this occurs down the west coast, but who knows.

I suppose the point of this blog is to introduce…

Pulling Shots and Serving Others

Baristas from over 50 countries will compete for the honor of World Champion Barista at the 11th Annual World Barista Championship (WBC) in London, England, June 23-25. The event will also feature efforts to raise awareness and funds for Coffee Kids, an international nonprofit dedicated to helping coffee-farming families.

This year, the WBC will be held in conjunction… Continue

When does nuance become nonsense? In the latest Los Angeles Times Magazine, food writer Lora Zarubin goes on a bit of a tirade about the “fetishization” of specialty...Read more.

This first half of Wayne Michigan's only coffee shop

The May issue of Fresh Cup is now available for your perusal. 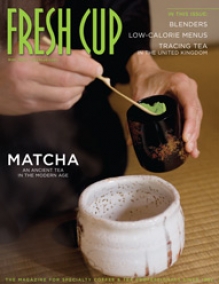 Read it online at www.freshcup.com

The 2nd Annual Homeroaster's Auction began on Saturday, May 1st. There are over 77 amazing items that will be auctioned off throughout the month of May. Last year's auction raised over $5,600 for Coffee Kids. Companies and individuals from the specialty coffee industry have donated an assortment of top-quality green coffee, magazine subscriptions, grinders, brewers, roasters and much more, with all proceeds going directly to Coffee Kids.

The auction will be hosted by the… Continue