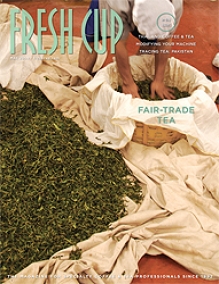 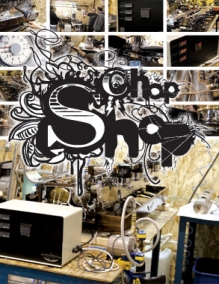 I'm at the World Tea Expo this weekend. So far the new business boot camp seems to be a very valuable resource for everyone that is signed up.

As a speaker I'm lucky that I get to attend some of the sessions! The Tea 101 class was outstanding and really made me realize how much more I have to learn about tea. Jane Pettigrew explained the differences, in detail, in the manufacturing process of white, black, green and oolong teas.

I'm going to start getting prepared for my… Continue

We are a distributor in the Tampa Bay area of Espresso equipment and supplies. We carry Iberital, San Remo, Rancilio, La Marzocco machines and much more. We also carry Italian beans Segafredo, Gimoka, and San Giorgio. Our number 1 seller is the Segafredo X strong! It has the highest quality Robusta & Brazilian Arabica beans and combined to create a strong, intense, perfectly balanced coffee with a rich flavor and aroma.

Besides the machines and the beans we also carry smoothie… Continue

follow the link is information about E61group head. it is very details about the… Continue

A "full" or complete E61 group refers to the "leva" versions of the machines - they have the E61 grouphead, the pre-infusion chamber (the chrome cylindrical shape below the grouphead) and the manual lever for operating the brew cycle on the right side of the group. The machines that only have the E61 grouphead have just that, the grouphead, but lack the pre-infusion chamber and the manual lever (they have a button or a keypad of some sort instead).

All of the machines such as Giotto,… Continue

AMERICAN GANGSTER LESSON FIVE: The Loudest is the Weakest

Setting the Scene:
The big city street life was new to Frank Lucas’ brothers and cousins. They were used to country life in the backwoods of North Carolina before being recruited into Lucas’ drug empire. Once in the game, these young men had instant status and inordinate wealth thrust upon them. It’s hard to stay humble when fame and fortune comes so easily.

Setting the Scene:
Frank Lucas’ “Blue Magic” heroin became the market leader in New York City. Rivals said he had “upended the natural order of things” by selling heroin that is twice as good for half as much. Competitors left the heroin market because “nobody wants to compete with a monopoly.”

To accelerate growth of the “Blue Magic” business, Frank arranged wholesale distribution agreements with other drug lords and mafia families. This shift in business strategy made… Continue

Setting the Scene:
“Blue Magic” has transformed Frank Lucas from a nobody to a somebody. Business is booming and Frank needs people he can trust to run his daily operation. For years Frank was estranged from his large extended family in Greensboro, North Carolina. However, family is family and he trusts his brothers and cousins to help him expand his heroin business. The Lucas family is uprooted from Greensboro to live and work in the new family business of “Blue Magic”… Continue

Setting the Scene:
In the early 70s, heroin was widely available in the streets of New York City. Common practice was to dilute the heroin with sugars, chalk, flour, or powdered milk. By diluting the heroin, dealers were able to significantly stretch their product inventory and maintain their high prices without upsetting their customer base. Customers had come to expect lower potency heroin as the only choice despite a growing number of dealers.

Setting the Scene:
Bumpy Johnson was an organized crime kingpin in Harlem. His considerable wealth, street smarts education, penchant for violence, and charitable community efforts made him a larger-than-life figure. For over 15 years, Frank Lucas served as Bumpy’s driver, bodyguard, and collector. Everything Frank learned, he learned from Bumpy. So when Bumpy suffered a heart attack, Frank vowed to continue what his mentor started.

Finally Charlotte coffee gets some love from the press! TV love, at that.

It's about time. I've been working to get this for two years. All I want to do is spread the love of good coffee. Here's to that end:
http://www.wcnc.com/video/traveler-index.html?nvid=354925

Is that a Mirage?

I am buying 2 Mirages for my cafe! I am going to give heat exchange a second look. I used to have a Faema and liked it well enough at the time (1995). A lot has changed. I like the Marzocco group and my Synesso is great, so I am a little nervous about the switch. I will keep my Synesso for a while to make sure that the Mirage is going to work for me. I've been jumping around excitedly all week and driving my peeps a little crazy. I will post pictures when they arrive which may be as soon as… Continue

Any Baristas in the Hollywood Area?

So.. the cafe is doing really well and business is picking up.. and we are in need of a new barista to keep up! We are located on the corner of Hollywood and La Brea, a couple blocks from the Kodak and Mann's Chinese theaters, and tourist season is fast approaching. We are interested in finding a new member of the family, preferably an experienced barista/server (as we do also serve food) -- and someone DEFINITELY with a great personality and love for coffee. Please feel free to send me a… Continue

Shouldn’t Starbucks be more concerned with disrupting and reinventing their core retail business and not the instant coffee category? this question is from "brand autopsy".

why starbucks? if people wants to chase a global dream, we should study from them. I respect them because they have build a coffee empire within short time. if you google "starbucks", millions sites talk about them.… Continue

Vietnam is the epicenter of robusta production, funded at a furious pace by the big corporate coffee buyers, which helped create the "coffee crisis" (more background on the coffee crisis here, with many links). Forests are cleared for these sun coffee monocultures. More than 182,000 acres of forest have been cleared in Dac Lac province alone; water shortages and soil erosion have been problems in coffee-growing areas.

A small percentage of the crop is arabica, and there is some… Continue