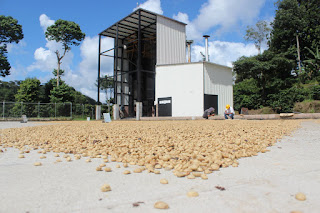 Beneficio El Manzano is now receiving coffee cherries every day, and with that the patios are beginning to fill up with the many different batches of coffee that has been processed. Batch number eight was laid out on the patio last night, however, like the rest of the current coffees on the patio, is forced to wait out the rainy afternoons and evenings in the warehouse, before it can be spread back out onto the patios.

While only eight batches of coffee have been processed to date, one will notice a greater number of sectioned coffees on the patio, and their colors are different. Each batch of coffee received at the plantation is separated into four primary qualities, which explains why you will see a higher number of piles on the patio than number of batches processed at the mill; however, coffee will range in color for several reasons.

Imagine picking two oranges from the same tree, one more ripe than the other, which still bears a shade of green. More than likely, they are going to have very different tastes, despite being the same fruit, and coming from the same tree. As coffee passes through the various pocessing machinery, the beans are sorted into its four levels of quality. Each level of quality bears a slightly different color, due to the degree to which the machines are able to remove the pulp from the beans, due to the levels of ripeness and size.

Secondly, coffee may differ in color based on the amount of time it has spent on the patio. Imagine a Northern Michigander sprawled out on an open patio, under a constant sun. After a few days, you'd start to notice color changes. Same idea, except that coffee is not being burnt while on the patio.

Coffee is laid out in the sun completely wet, with a near one hundred percent moisture content. Over the next five to eight days, that moisture will be drawn out, forcing the beans to undergo a major chemical change, which as they remain on the patio, begins to change the color of their parchment.

The third reason coffee will vary in color, is due to the different types of processing it undergoes, after being harvested. Coffee cherries can be 1). Fully Washed - which means, after being de-pulped (having its outer fruit removed) it will spend several hours in a fermentation tank, in order to separate the bean from its mucilage; 2). Machine Washed - which means, that the cherry is de-pulped, but bypasses the fermentation tanks, and has its mucilage removed by a machine, using water; 3). Pulp Natural - the coffee cherry is de-pulped, but is dried without removing the mucilage; 4). Natural - where the coffee cherries only pass through a tank of water to determine the two main degrees of quality of cherry, but are then spread out on the patio to dry, without removing the pulp.

Beneficio El Manzano is capable of processing its coffee by each of the four methods, and depending on the method used, will determine the color it gives off on the patio, the fully and machine washed bearing a shade of tan or brown, while the natural coffees remain the red color, as it remains in its cherry on the patio.

If you happened to ask that question regarding the coffees you see in these photos, it is primarily because of the first reason I mentioned. All of these coffees, batches three through eight were processed with the Machine Washed method, and range in color solely because of the different qualities of coffee that are separated by the processing machines. 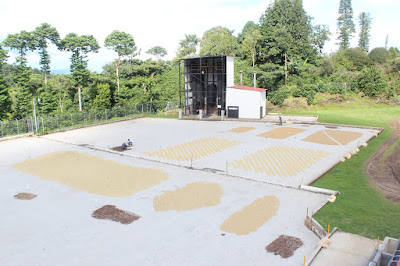