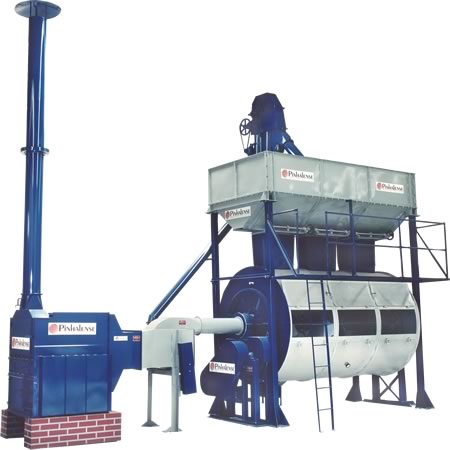 The new mechanical dryer has arrived at the plantation, and after sitting at port for a hectic week, rests disassembled, scattered about the plantation, awaiting the completion of its covering at the new patios, for installation.

After being harvested, all coffee, whether de-pulped and washed or natural, must be dried to an internal moisture level of twelve to twelve and a half percent before it can be bagged and roasted. For this step in processing, beans, as parchment or cherries, are spread out onto patios.
Although ranging according to country, patios in El Salvador typically contain clay or cement tile. Beneficio El Manzano houses cement tiles, with a total area of approximately 48,500 square feet, in addition to the 20,000 tiles being laid presently, handling 1.1 million pounds of green exportable coffee in 2010-2011.
All of the coffee processed here will remain on the patios a minimum of two days; until its internal moisture level has dropped to less than 40%, at which point some will remain on the patios another three to five days, until reaching twelve to twelve and a half percent, while the rest will be put into mechanical dryers to complete that process.
The mechanical dryers currently used at the mill are vertical cylindrical dryers, and were constructed in the 1970's. In these types of dyers, coffee is cycled every hour from the bottom to the top of the cylinder via bucket elevators, where it passes through streams of hot air contained at the bottom of the dryer, ranging from 125 to 135 degrees Fahrenheit. The heat for the dryers is produced by furnaces burning coffee husk.
The new dryer that will be installed, is a horizontal cylindrical dryer, pictured above, which allows heat, produced by furnaces, to enter through a central shaft, and releases it through a rotating perforated cylinder, where the coffee is being circulated. Unlike the vertical dryers, heat passes through the entire cylinder, meaning the coffee is channeled, but dried without pause, thus reducing both the time needed for the coffee within the dryers and the amount of husk consumed by the furnaces.
We hope to have the dryer installed by the middle of the month; but for time being, it remains an intriguing myriad of mechanical import shrapnel for wandering photographers.
Helpful information gathered from: http://www.coffee-ota.org/cd_hygiene/cnt/cnt_en/sec_3/docs_3.2/Intr...