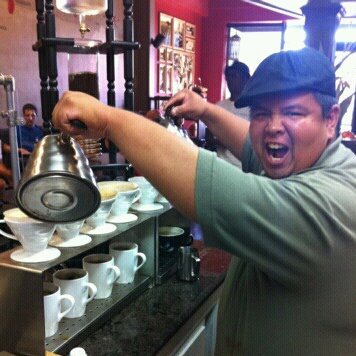 Cedric has not received any gifts yet

What is your position in the coffee industry?
barista, manager, barista trainer, coffee enthusiast

Where are you located? ( City and Country )
North Las Vegas

How many years have you been in the industry?
10

If you are a barista or shop, are you interested in a barista exchange with another coffee shop/barista?
yes

Tell us more about your coffee shop or barista skills.
My barista hand is strong =P

What cities or countries are you interested in traveling to?
Philippines is always fun, but I really want to check out Malaysia

About Me:
Besides having a passion for coffee, I love playing tennis, cooking, and salsa dancing

About My Company:
Just picked up a barista job at Samba Latte. Best place in Las Vegas to get a drink!

What is your favorite thing about the coffee industry?
Being able to give people a little knowledge about coffee. But I totally love the customers reaction when it's their first time seeing lattee art.

Thanks, I'm gonna purchase the tamper piston and thread first. And then I guess I'll make a trip to Auto Zone and see what happens.

Interesting, I don't see any screw holes on the tamper base threads... do you need to drill them on or something?

Thanks a ton. I'm gonna give it a shot. I'll probably order a base and thread tomorrow and check out Auto Zone or something.

I tried going to Auto Zone's website, and they had something that looks pretty identical to the skull handle I've been looking for. I wouldn't be surprised if Espresso Parts used these shift knobs...

There are some variants of it, but for the most part, this one seems to fit the bill. The only thing is, do you know if Espresso Parts would be willing to sell me some black bezel rings? They only have brass colored rings, but I don't think brass would go well with the silver.

BTW I was surfing the net for shift knobs, and check this one out. Looks super sweet, but I doubt it would make sense on a tamper, just because the bottom is pretty wide. I don't know how it would screw on to a tamper piston... it might look weird, right? Also, it looks like something you mold on to your stick... I don't see anything for threading, at least from the pictures available.

Also, I was looking at some bullet shift knobs, and I thought it would be really sick if there was a shift knob for Bullet Bill.

Also let me know how you think this gun barrel style shift knob would work on an EP tamper... I like it, but it probably won't work, simply because it seems to have a triple polished chrome finish, whereas the EP tamper pistons aren't polished.

Will shift knobs fit in the tamper piston? That would be pretty amazing...

paulito said…
Nice!!! Have a good weekend, looking forward to meeting in person I'll be in mon n tues but leaveing for scaa Houston on Wednesday or thurs.

paulito said…
Actually I think we are looking for people right now. Either come by the shop and ask for me or there's an online app on our web page. I'm usually at the shop from open to 3-4pm most days. Or you can just gimme a call and we'll figure something out 702-677-0063.

In Pulau Pinang, you can try at Lighthouse Cafe @ Jalan Logan.

Selina said…
Hey! We're open til 1030 everyday. U should come by during the day, when im there, tho! The past couple weeks have been fun, met 3 BXers at the cafe! Im off Fridays n Sundays -- other than that im always there during the daytime!