Recently I was on a retreat and Fr. Bernie, who was leading it, challenged us to imagine what God tastes like. I was surprised to find that God tastes like espresso. I am still thinking through the implications of this.

The flavor profile I look for in a shot of espresso is one that rumbles and grabs my tongue. It has a boldness and a clean finish with a fine aftertaste. It seems I want that particular profile because it reminds me of how I experience God. I find I look for similar… Continue

A Spiritual Rule in Espresso

Musings on the Parable of the Coffee Shop 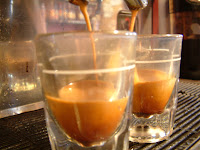 The parts to a good espresso:

The first thing needed in preparing good espresso is a…

I created a couple trivia challenges based on the test we use for Barista training - so my trainees could practice. Check them out here: Part 1, Part 2

I did some more work today on my old single group Grindmaster Espressimo machine. The Espressimo heats the group head with a heating element that encircles the top of the group. Mine went out as heating elements like to do. So instead of buy a new calrod element for about 30 bucks (though I didn't think it would be that cheap), I decided to heat it with steam - more like an E61. I simply extended the copper tubing that went to the vacuum breaker valve and routed through the cavity in the group… Continue

Praying the hours with a cup of coffee?

I am quite taken with the latest tool I’ve found in my quest for spiritual discipline. The podcast from divineoffice.org offers wonderful readings of the hours. I adore their use of music throughout the podcast both incidentally under some of the prayers as well as at the time of the hymn. A bell chimes at the beginning and end calling the soul to prayer. I was… Continue

Parable of the Coffeehouse

My favorite metaphysical image from Leaper by Geoffrey Wood

The parable of the coffee shop shows that the kingdom of heaven is likened unto a man who goes into a coffee shop and orders an espresso. As the man talks across the counter, the coffee guy makes his coffee ands sets the cup and saucer on the counter between them. But the man doesn't drink it; he keeps talking, so the coffee gets cold, useless. The coffee guy pours it out and pulls another, sets it up. The man…

"Am I really willing to drink this cup?" A question I love to ask my self pushed back from a table at a coffeehouse. Especially if it is a bold, Marrakesh Espresso that rumbles like thunder, grabs your tongue and wrestles you to the floor and finishes with a kiss and a playful bite. Ah the contemplative life!

....Oo! I think I just found another analogy!

My friend Cliff has been going to a soup kitchen in Saginaw once a month. He pastors an ELCA church in our area and is very successful mobilizing his people into action. I went with him the last time they went. Six of us headed out at eight o’clock Friday morning. I’m not much of a morning person, so I was quiet. I had already been up for a while to take my wife and kids to work.
When we arrived, we went straight to work. My first duty was to wash a couple hundred pounds of frozen catfish… Continue

One of my dream machines Deus ex machina comes to the rescue again. In ancient Greek plays, when the plot was too thick, and a resolution too hard, a god was lowered in a machine and solved all the problems: the god from the machine. The Greeks had it right. Our critics today look and say that you can’t tie up loose ends so neatly, or you can’t introduce new information or characters at the end to solve everything.

I know better. Come what may, Ella breaking a brand new DVD trying to get it out of its case,… Continue

Phrase of the week:

I have been trying to create a metaphor for describing coffee qualities comparing it to balancing a stereo equalizer. The acidity creates a sharp treble tone that can give the coffee a crisp citrus taste or a mellow wine tone. The midrange is made up by the body of the coffee, or its coffeeness, it could be bold or smooth. Then comes the Bass tone. That is the unifying undertone that resonates in your taste buds giving the coffee a satisfying power.

The question remains, how do I… Continue

Bay City Coffee and Tea is back in my good graces. Jeff the barrista confirmed that they don't use "Big Train" powdered crap like the ice rage. The signs are just up for something to look at. Right on! Highjack corporate brand recognition.

Tonight I came for a bluegrass jam and stayed for a discussion about biblical historicity put on by Grace Christian Fellowship. Jeff asked me what I thought, and here it is: It was pretty good, a little more didactic and less relational than I… Continue

I went to the new Coffee Tree Café today. It is across the river from downtown Bay City, what is that? Uptown? It has the atmosphere down. Tables of dark mahogany or oak, funky black chairs set off a light airy texture. It has the culture of a hep cat. The Metallic Green espresso machine pulls together a vintage theme—the pigment on the canvas of high ceilings, Art Nouveau metal work and…

Of course, it took me too long to get out of the house, and after the half hour drive here, I don't feel like going through with it... Writing.

So I watch the few people here. The only live ones are a couple who met here for coffee, there is the excitation and light on their faces of… Continue

I realized something while watching people in the mall today. Everybody is a freak. Some of us try to fit in while others don’t. Makes me feel better about myself.

I sat writing and drinking glorious coffee at Bay City Coffee and Tea for hours. Then I went to Sweet Boutique.

Here is my evaluation of the House Blend at Sweet Boutique in Bay City. It has a light texture, with a sharp, lively acidity. The bouquet is reminiscent of turpentine—a definite chemical taste, not the… Continue