The Porcelain V60 by Hario 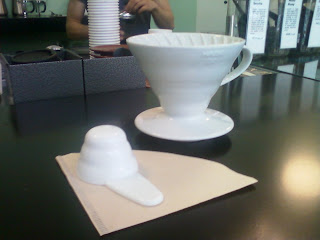 Yesterday I had some coffee made through the Hario V60 Porcelain over at Comet Coffee in Ann Arbor. It's an interesting little thing. It's basicly a pour over with a big hole at the bottom instead of two small ones, you need to use a different filter that's pointed at the bottom (similar to the Chemex in that regard). Take a look at the picture of the nice woman with the filter to get a feel for it if like.

The other thing that's interesting is the use of some spirals in the filter itself. Look at the image...

The design is supposed to accomplish three thing:

1. The Cone - The cone filter shape is supposed 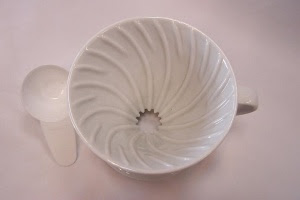 make sure the water is in contact with coffee beans for longer during an extraction.
2. The Single Large Hole - Is designed to give the Barista a greater control over the speed of extraction.
3. The Ribbed Spirals - Are intended to create room for the coffee to expand.

Ok now you know the theory...

I don't have a whole lot of hands on experiance with the thing yet, but we did do a side by side comparison with some Sidi Kalang from Ritual.

Jim had had some trouble with it, and had heard it works best if you use a course grind (almost a French press level) and pour very slowly so we tried that. 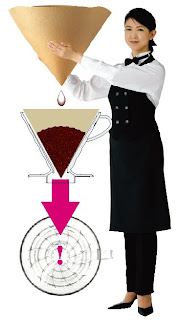 The result was a coffee with almost no body, but some intense flavors and a great finish.
I thought it was interesting it really brought some of the subtle flavors to the front. The Coffee was not very strong to begin with, but with this method if felt so light and crisp.

I'm not sure I like it better, but it is an interesting way to bring some of the more subtle notes to the front.

Has anyone else tried this?

Let me know what you think!

For more information go to http://www.javys.com/hario/video/v60.htm

Permalink Reply by courtney marie on July 30, 2009 at 12:51pm
i'll definitely have to check this out when i go to comet in the next couple weeks.

Permalink Reply by Derryl Reid on July 30, 2009 at 1:43pm
Hario has an interesting product line This "dpw" is the way the true Icelanders in our area brew their coffee!
Except the bag sits in the pot the don't use the upper drip pot

Permalink Reply by Billy Kangas on July 30, 2009 at 2:06pm
Interesting... it looks like a Chemex. You say you can detach the top though?

Does anyone in the Midwest use these? I'd love to try it...

Hario has an interesting product line

This "dpw" is the way the true Icelanders in our area brew their coffee!
Except the bag sits in the pot the don't use the upper drip pot

Permalink Reply by Billy Kangas on July 30, 2009 at 3:10pm
Check out this Coffeed discussion on the whole issue...