We've been wanting to add a profile monitoring system like Roastlog or Cropster to our roaster. We gave both a good look at Expo last week but am still not quite sure which direction to go. There seems to be more similarities than differences.

I've had good discussions with the folks at Roastlog about their product, but those Austrian fellows have a great product as well.

Our primary uses would be for roast logging and profile monitoring. The cupping feature on Cropster would be useful, but it looks like Roastlog is working on that also.

Any opinions about preferences, functionality, etc. would be greatly appreciated.

Cropster has live bean temp. rate of rise readings/min. during roasting and RoR graphing for post roast analysis (BT RoR) Been using these added features in my own personal system for a couple years.

I will disclose that I was one who encouraged them to add the recent BT RoR graphing feature.

Here is the Cropster blog post on it's release. It has since been updated to also stack the BT RoR graphs

Those systems are pretty pricey... I've been using Typica (http://www.randomfield.com/programs/typica/) for about 4 months now and I'm pretty happy with it.  It's free and seems to do most of what the other systems do (though no BT RoR feature - I copy everything into spreadsheets for analysis after the fact, but can't see RoR live)  Here's an example of data from two experimental roasts I did while learning the behavior of a new roaster.  It's probably not as user friendly, but it's worth the savings for us.  The programmer was even nice enough to help me by tweaking the code on a few issues that made it easier to use with our particular machine and the type of files I wanted for export/archiving.  Pretty cool!

I was in a rush earlier and only had one graph online.  This one is a better example of what I usually look at.  The RoR line really tells the story of what's going on in the bean so much better than what you can see by just looking at the temp curve itself!

Great to hear your finding the BT RoR graph handy post roast. But your not able to see it generate live? or are you?  Using the readings to help steer the roast is a pleasure. My system has an lcd display for live numbers plus the live computer graphing and .csv filing BT RoR

No, I can't see live RoR, and it would definitely be nice sometimes... Although I'm not sure it would change things much for me in my current job.  I'm roasting on a 24k Diedrich from 1999 and it takes about a minute and a half to see any response when you change the gas setting (lots of thermal mass in the IR burners, plus heat exchangers, drum, etc. I assume?)

The lag is so bad that I really have to guess and anticipate way more than I'd like.  I've had almost zero luck making any adjustments on the fly - I pretty much make a plan for each roast and then learn from the results and try again.  In my last shop I roasted on a 20k Probat from 1957.  It had standard burners and 50% more power, so you could adjust much more quickly to what you saw happening during any given roast on that machine (I miss it!)

If I wasn't already up and running with this setup, it'd be pretty tempting to go for something like what you've got.  Maybe in my next job!

Artisan has a real time graph, rate of rise for beans and MET(or ET). Its free and the dude(s) who wrote it are super nice. Ive been using it for about 6 months and its a pleasure to use.

The thermocouples often used are so thick and heavy they react very slowly plus as you say the heat exchangers make it tougher to adjust on the fly. At least the RoR graph gives a clearer post roast idea of how the beans reacted.

Thanks to everyone who has responded to this so far.  It's very helpful.  My week has gotten very busy so I need a few days to take a serious look at the suggestions.

The thermocouples used on Diedrich machines are highly responsive to temperature changes and this is clearly illustrated during the warm up phase. Diedrich machines are designed to provide a very stable roasting medium using a combination of the infrared gas burners and the heat exchangers. The heat exchangers provide a stable temperature regardless of the position of the air damper or the flame level. However, this stable temperature means that there is a lag time between adjustments in the flame level and changes in the RoR - you need to think around 2 mins ahead of the curve as to where you need to be.

On the datalogging side I also use Typica. Neal, the developer, was super helpful - even changing the coding to cope with a new piece of hardware I received from National Instruments. I understand Neal is currently working on V 2.0 of this software. I have found that once a suitable profile has been developed for a particular bean it is less important to have real time RoR readouts.

The thermocouples often used are so thick and heavy they react very slowly plus as you say the heat exchangers make it tougher to adjust on the fly. At least the RoR graph gives a clearer post roast idea of how the beans reacted.

Thanks Dustin for your kind words. Here is the link to its home: Artisan: Visual scope for coffee roasters

We are currently busy preparing the next release (v0.6). The new features are discussed in the newly established Artisan Blog

Artisan has a real time graph, rate of rise for beans and MET(or ET). Its free and the dude(s) who wrote it are super nice. Ive been using it for about 6 months and its a pleasure to use. 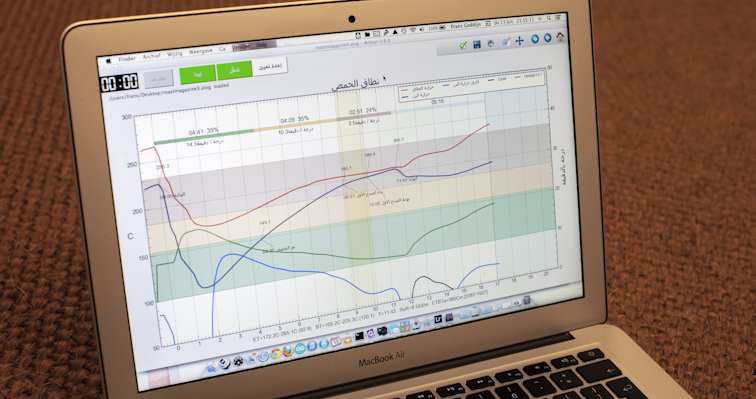 The version 0.6 of Artisan, an open-source software that helps coffee roasters to record, analyze, and control roast profiles, is now available for Windows, OS X and Linux.

The most important changes and additions w.r.t. v0.5.x are as follows.

See https://code.google.com/p/artisan/wiki/ReleaseHistory for a detailed list of changes and the Artisan blog http://artisan-roasterscope.blogspot.de for details on some of the new features.

We do not take donations. But if you are using Artisan in a commercial setting, it would make us (and some others) happy if you would donate to Coffee Kids http://www.coffeekids.org/, a non-profit organization devoted to improving the quality of life for children and families in coffee growing regions around the world.